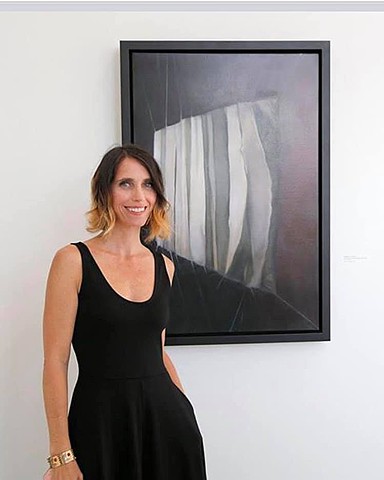 Stephanie Leonard was born in Peru and lived there for 13 years. The dichotomy of a picturesque country, visually rich in the arts and affluent societies - against - the tragically impoverish, the prevalent terrorism and natural disasters of that time, left a lasting impact, one about “beauty and chaos.” Several years later in the US, Leonard first began drawing and painting when her life was drastically altered upon finding out that her 5 year old daughter had cancer. Today, Stephanie Leonard is an artist and Fine Arts College Professor in Orange County, California. She received her B.A. from The California State University of Long Beach and Masters of Fine art degree in Painting from The Laguna College of Art and Design, CA. Her work is in private collections in the United States and in South America, it has been exhibited in group shows in the East Coast and in diverse areas of Southern California as well as the Laguna Art Museum, through public artwork, and in the set design for Universal Pictures feature films. With the use of surrealism and magical realism that can range from detailed to simplified forms and ongoing experimentation of undefined art that revels in the uncanny, Leonard’s oil paintings often explore narratives about wonder, nostalgia, and the resiliency of the human spirit.